Helmut Hirler is part of an unbroken tradition of bold pioneers, who for centuries attempted to describe the earth’s strangeness and beauty. When photography became portable in the mid nineteenth century, it outstripped the wordy reports, augmenting and replacing these with the likenesses of landscapes and cultures. To capture these, even photographers would take great pains upon themselves, accompanying explorers on yearlong expeditions or traveling alone, all the better to astound those who stayed at home with his discoveries upon his return. The singular prints and photographic enlargements from this era are an exclusive market today.

Urbane photographer Helmut Hirler takes his motorcycle, his panorama camera in his backpack, for the treks he now finds short, like from his native Allgäu, Germany to the Spanish mountains. Yet the ever-new search for far-flung natural and cultural landscapes also tempts him. Writer Paul Theroux might well express his thoughts: “That is the best mood for a departure: I was ready, I was game for anything. Only later, when you’re en route, do you notice that the greatest distance awakens the greatest illusions and that traveling alone is both a pleasure and a burden.”* Photographer Hirler relates his long, solitary tours in his panoramic images. 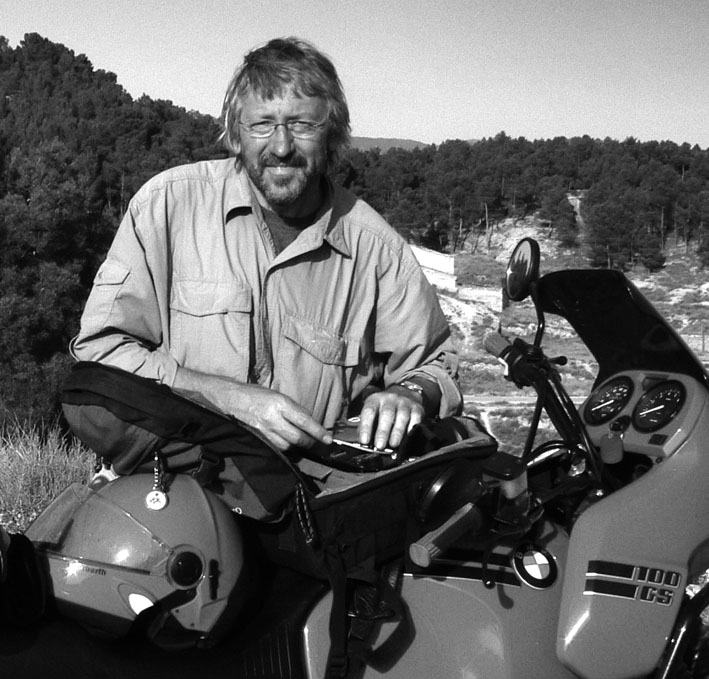 They often lead him to southern regions; the Asian Pacific region is one of his primary destinations. But he also finds space in his work, which is regularly honored with exhibitions, books, and calendar editions, for the wooded landscapes of his native southern Germany – almost as much as for sprawling deserts, hidden river valleys, and venerable Asian temple complexes.

Hirler has also anchored part of his life and work in New Zealand; high-ranking galleries here also display his images. The true reason for his love of New Zealand, however, lies not only in his success there but also in the artist’s temperament. He calls the best thing about a “one-in-a-century day” being under an open sky with a camera, alone, “not a single person far and wide.” An experience one has seldom in Central Europe – but it is possible in New Zealand, as well as in Iceland, parts of central Spain, and all the areas of untouched nature Hirler tirelessly travels through. “The unknown landscape is enough reason to look for it”* Paul Theroux offers as an answer.

Hirler makes a lot of time for his photographic journeys to new regions, as he did most recently for the entire year of 2007. Hirler had a particular camera in his luggage. The heavy Technorama with a 6x17cm negative format captures images on black-and-white film – only four shots per roll – in hardly beatable brilliance. He often uses infrared materials and perfected filter combinations in order to convey a landscape’s strong sense of drama. In doing so, Hirler reinforces his encounters with nature in his shots, continues the dialogue in the darkroom, and only then, when it truly speaks to him, renders it in a photograph of the finest gray tones. It should tell of solitary wanderings through wide landscapes and their beauty. The phrase “bound to nature” is too insipid for Hirler’s devotedness; something much stronger penetrates the surfaces of his photographs: the unbound love of the visible world.